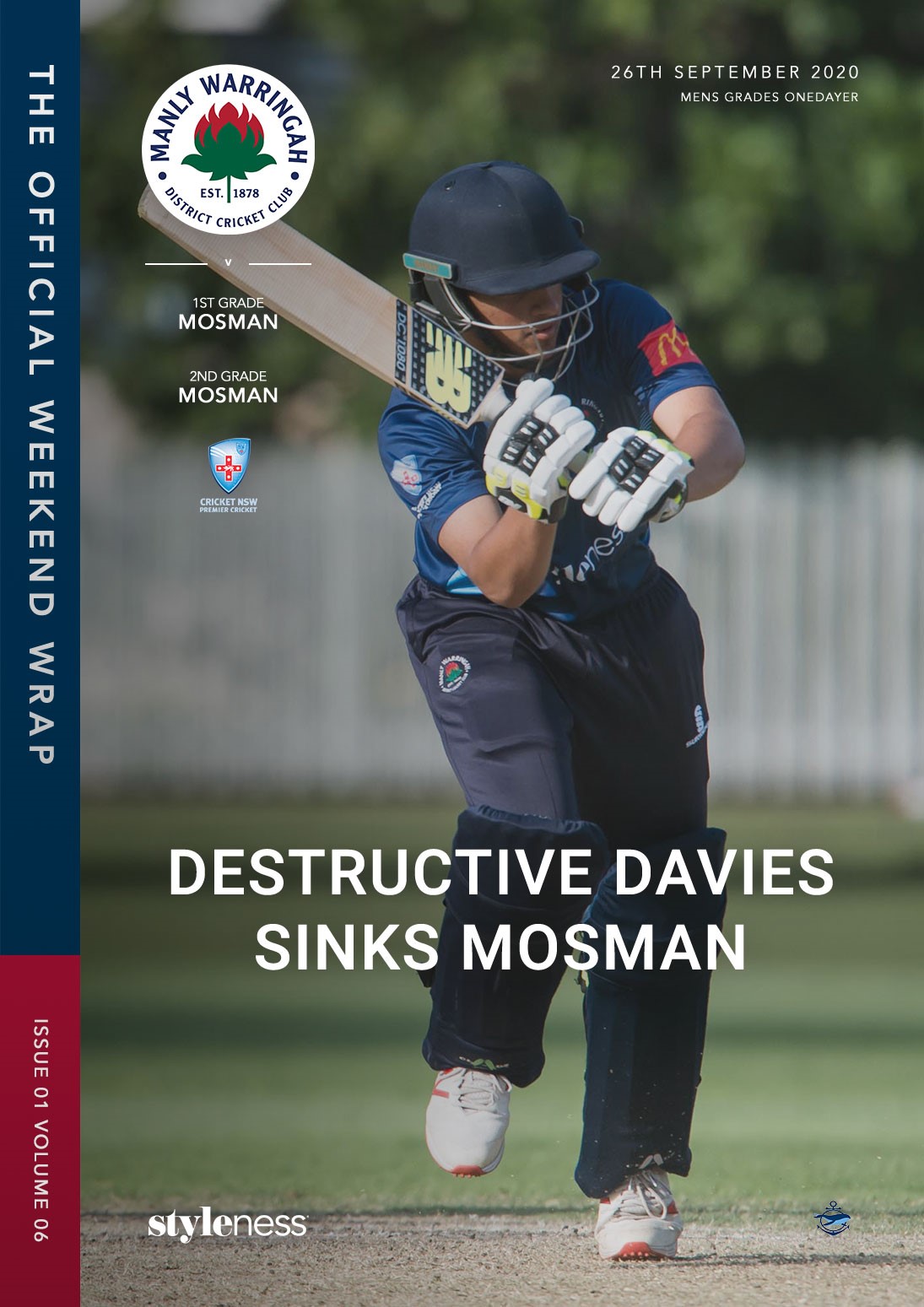 After no doubt the most unusual and chaotic start to a cricket season in living memory GRADE CRICKET IS BACK.
Saturday saw the first round of the staggered Sydney Grade Cricket competition begin as planned, with Manly taking on Mosman in 1st Grade at Allan Border and 2nd Grade at a Manly Oval that was looking in excellent shape considering there was rugby played on it only one week ago.
Batting first, the openers set a solid platform before a brutal Ollie Davies’ knock of 130 off only 86 balls accelerated Manly to a dominant 303 from their 50. Despite moments where it seemed that a couple of dropped catches could become costly – notably Peter Forrest dropped off debutant Andrew Hicks for 0 – the Manly bowling attack was clinical, taking wickets with a regularity that prevented the Whales from forming the big partnerships they needed to get in the hunt.
It was a similarly strong performance for Manly 2nd Grade in their first outing of the season. Choosing to bowl first, Tom Kaye (3-35) was clinical from the start. After a dangerous partnership began to form, we came back with Mosman eventually closing their innings 188 all out.
With the bat it was the Matt Brewster/Joel Davies show, with the pair putting on a match-winning 142-run partnership that put the game out of Mosmans reach, helping complete a comprehensive 6-wicket win.

An outrageous performance that displayed some of the most dominant, aggressive and classy strokes the club has ever seen.

Ollie Davies is this week’s Player of the Week after his enormous 130 off just 86 rocks against Mosman. His marvellous dig was the nucleus of First Grade’s huge win to kick-start their campaign, where he was travelling around a run a ball till 30, until going berserk before raising his helmet.

It was the pinnacle of One-Day batting and had everyone who watched in awe of his elegant timing. After spending time on the sideline last season, Ollie is roaring to go this year and this weekend’s innings is a pre-cursor for what is to come of the young man. The club is nothing short of excited for what is to come.

Go Ollie and Up the Tahs! 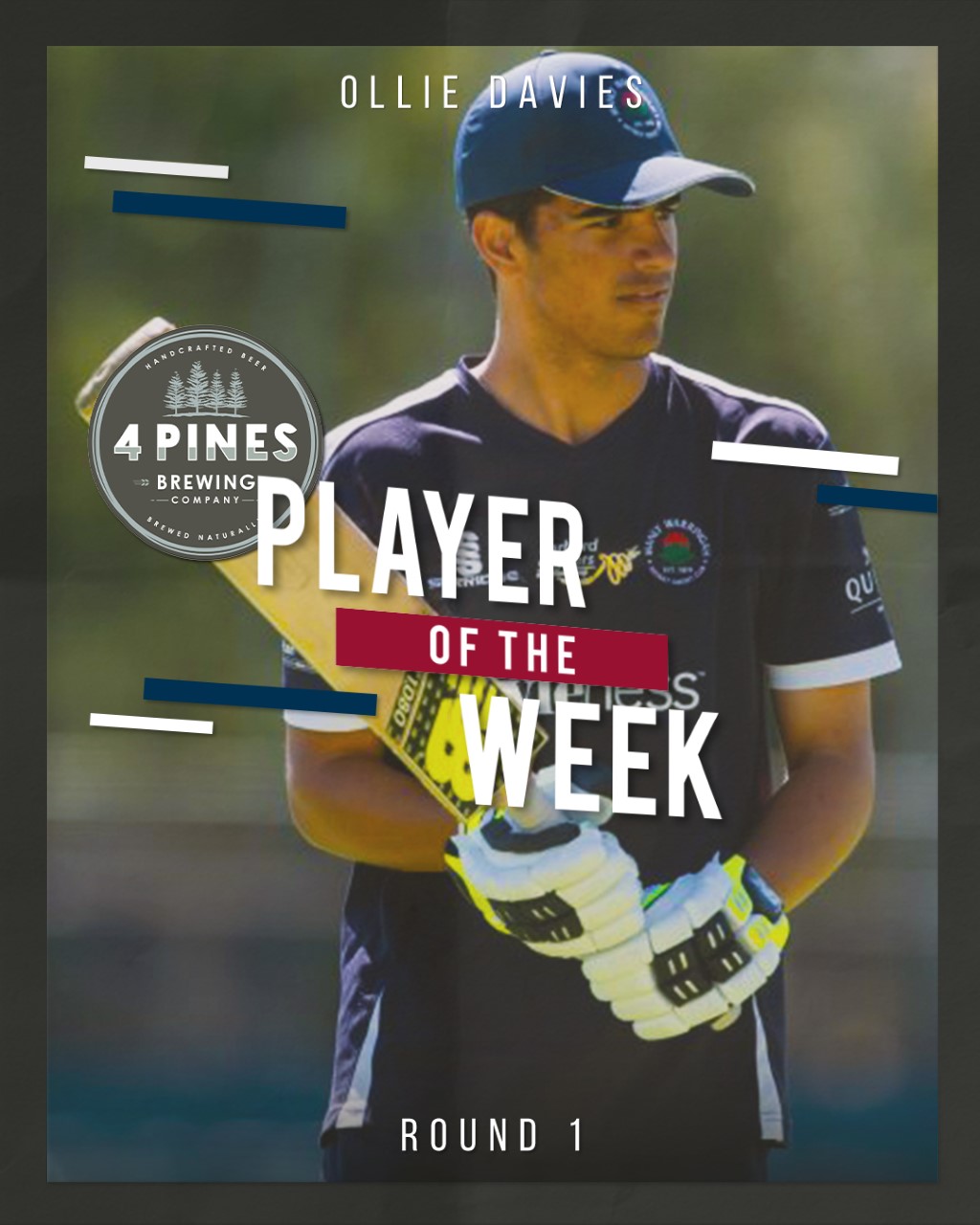 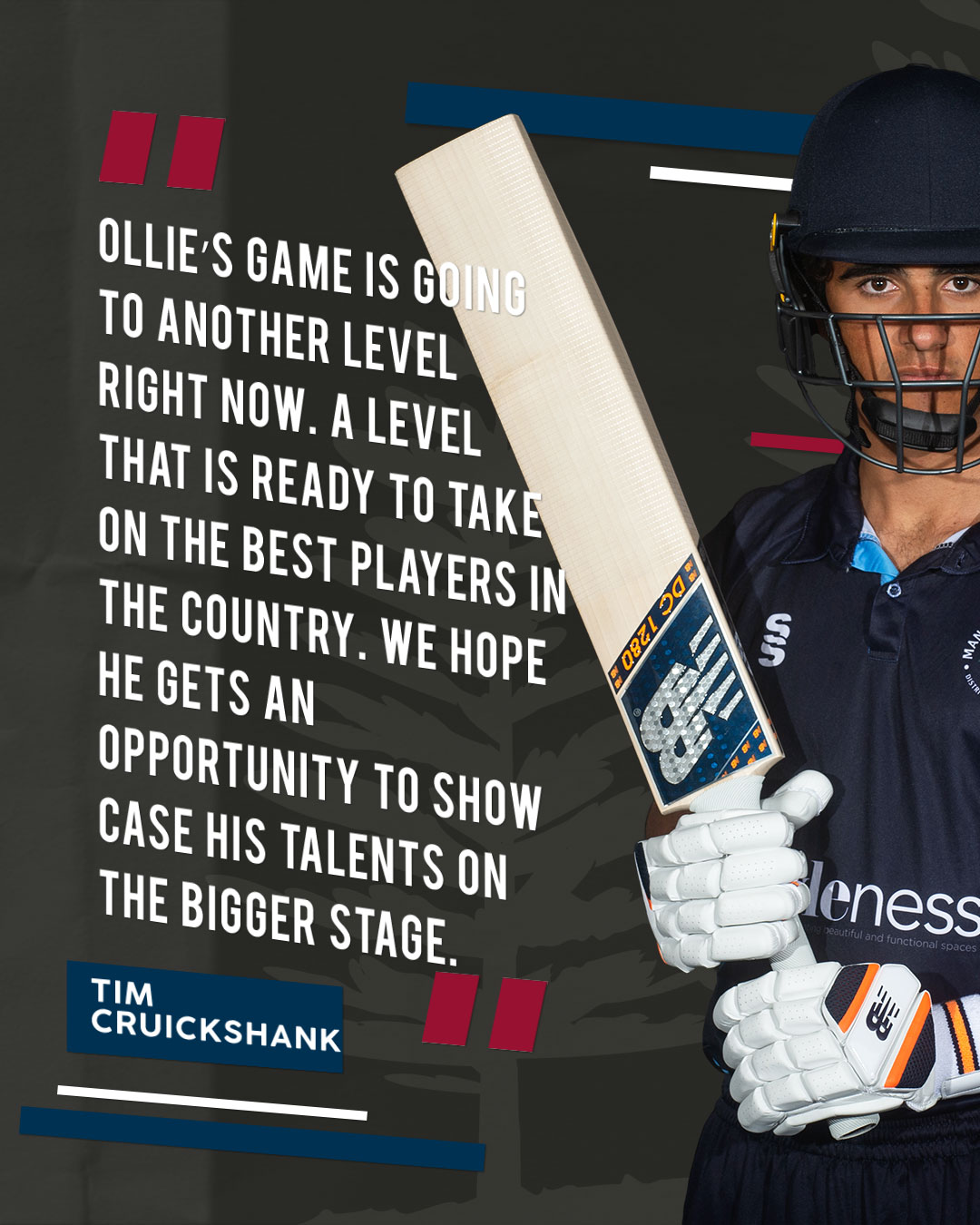 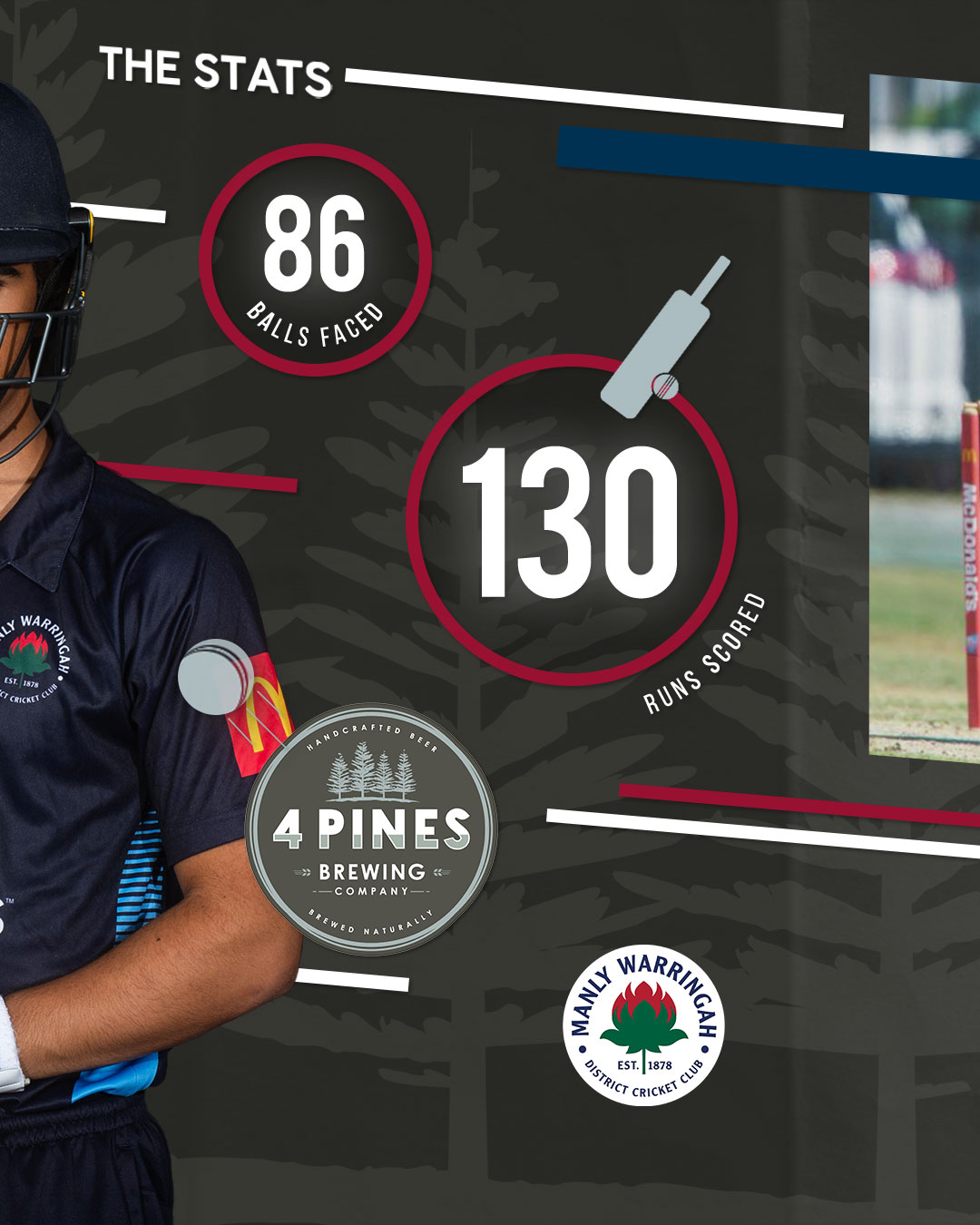 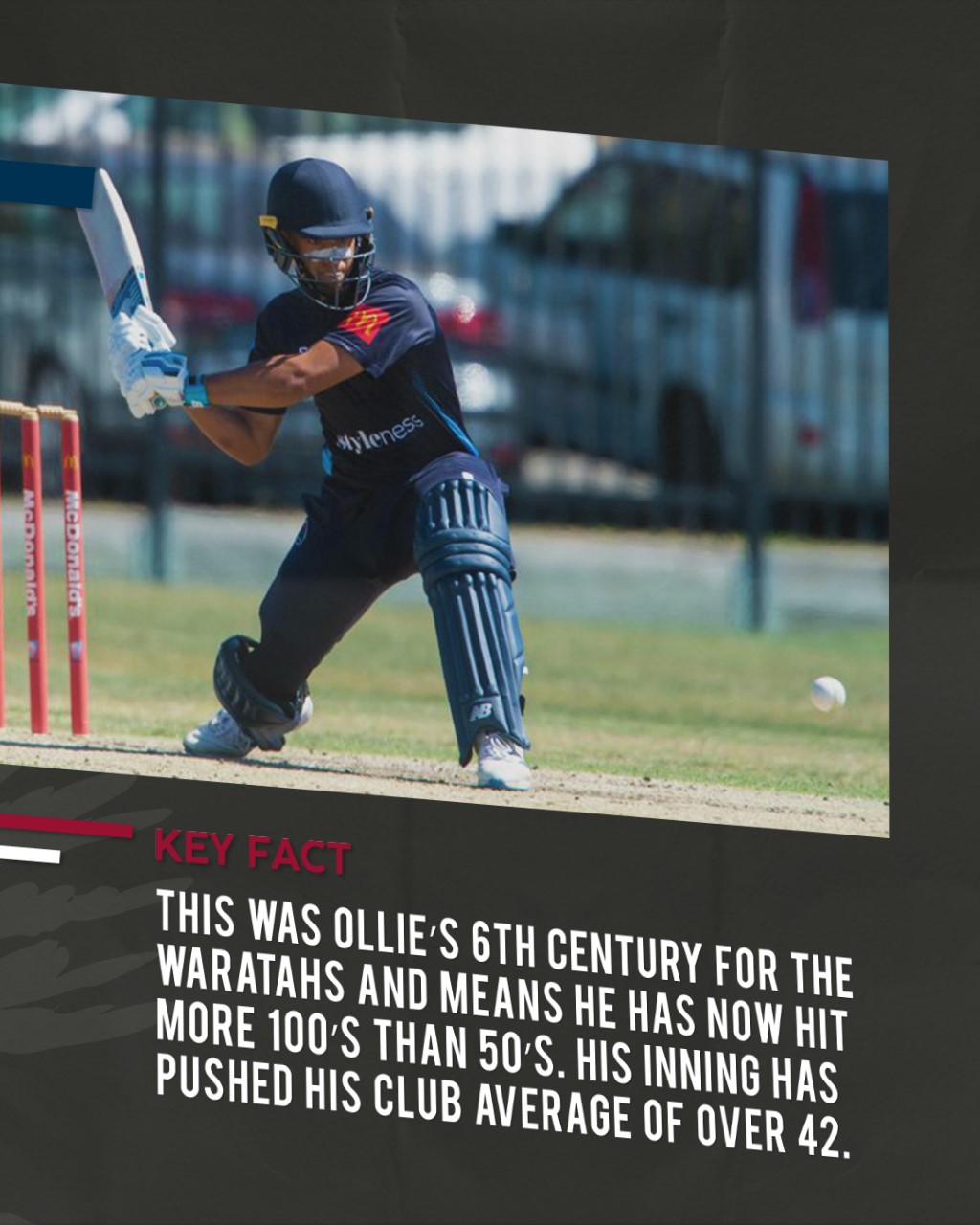 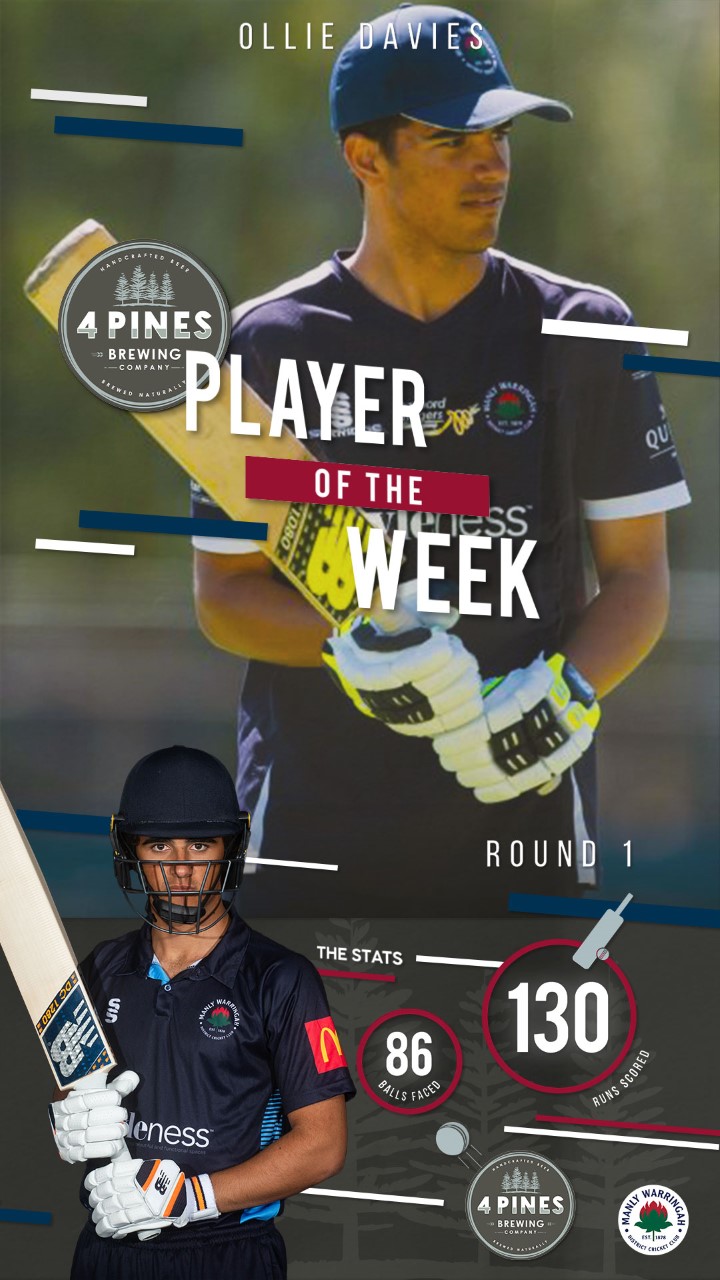 he Manly boys arrived at Allan Border oval full of excitement in anticipation of round 1 of the Premier Cricket season. The squad has had a magnificent off season and were well and truly ready to go for this match.

A revamped square and no winter sport meant the game would be played on an absolute belter. When Mosman won the toss and sent us in, a few eyebrows were raised. Skipper Jay Lenton and new recruit Ben Bryant got the Tahs off to positive start, scoring steadily and rotating the strike in the first 10 overs.

When Bryant (29) fell in the 16th over the with the score on 50, the innings looked like it could go either way. NSW Rookie Ollie Davies joined his captain at the crease and the two continued to knock the ball around patiently, taking the score to 99 before Lenton holed out to long-on. The ever-consistent Cameron Merchant joined Davies at the crease and from here things changed dramatically. Davies, who for his standards had started steadily began to smash the hapless Mosman attack to all parts of the ground. Merchant proved to be a perfect foil, playing his usual busy innings rotating the strike and punishing anything loose.

The pair put on a remarkable 137 run stand with Davies bringing up his 4th first grade century in sensational fashion. He was finally dismissed in the 42nd over for a fine 130 with the last 100 runs coming off less than 50 balls. It looks only a matter of time before he will be doing this at the next level.

Merchant continued to knock the ball around finishing with 46 and this together with late innings cameos from Ryan Farrell (25), Elliot Herd (14) and Stephen O’Keefe (9) took the score to 7/303 after our 50 overs.

Some forced late withdrawals from our NSW squad members Ryan Hadley and Jack Edwards meant that last years 2nd grade attack would have to get the job done for the visitors on a wicket that only got better throughout the day. Mosman started in a tentative fashion allowing 2nd grade veterans Hicks and Jamieson to ease into their spells. Some tight bowling and a great run out had Mosman at 2-65 after 16 overs with the game still in the balance.

Skipper Lenton would be proud of his troops as despite missing 3 relatively easy chances through dropped catches the side were able to pick themselves up and assert dominance in the 2nd innings. Elliot Herd (4-17) and Jake Carden (4-29) both bowled the house down ripping through the Mosman middle order with ease. Two outstanding catches to both Farrell and Merchant made up for earlier missed chances with the hapless Mosman tail being no match for the Manly attack.

A great start to the season in both grades will have the coaching staff thinking positively as we prepare to face the strong St George club in round 2. The club has a great feel about it this year and with some hard work and positive attitude some finals cricket may just be on the cards.

Thanks as always to the amazing volunteers we have at the club, especially Juice and Holmsey for their efforts on the day.

season starting in unprecedented times, with conditions never seen before to be in place, there was only one thing in the Manly Second Grade’s mind, and that is victory. A clash against long term rivals of the club, the scene was set for an almighty game.

Manly decided to bowl first, under Captain Sam Gainsford, where a sensational and quintessential run-out from Sully opened up the wickets. Momentum was strong and moral was high. An amazing opening partnership led by Tommy Kaye, saw an outstanding 10 overs, taking three crucial scalps with 3/35.

Alongside him, Josh Seward bowled with immense pace in the partnership. This was really well followed by Prowse, who managed to take two classy scalps of his own. The spinners then came on and bowled the middle overs, however, Mosman began to build a partnership and put the Tahs under pressure.

However, we eventually broke through, and some really solid and well executed death bowling from Sully, saw the boys restrict Mosman to 188.

It was the Manly boys’ turn to bat and begin the campaign with a victory. We lost an early wicket in Loges, where Joel Davies was brought to the crease with Matt Brewster.

Both batsmen, for the next 142 runs, put on an extremely well-crafted partnership full of poise, team-orientated decision making and classy batting to watch. Both of them held their wickets with value and glided along their way to well-deserved 72 (Brewster) and 70 (Davies). Great innings to watch and get behind to start the season.

Manly then lost a few wickets short of the total, where O’Sullivan and Vumbaca batted together to finish off the game. Huge credit to Matt and Joel’s big partnership off the back of an exceptional bowling performance led by Tommy Kaye, to sing the song loud and proud; ‘Ohhhhhh we’re on the march…’