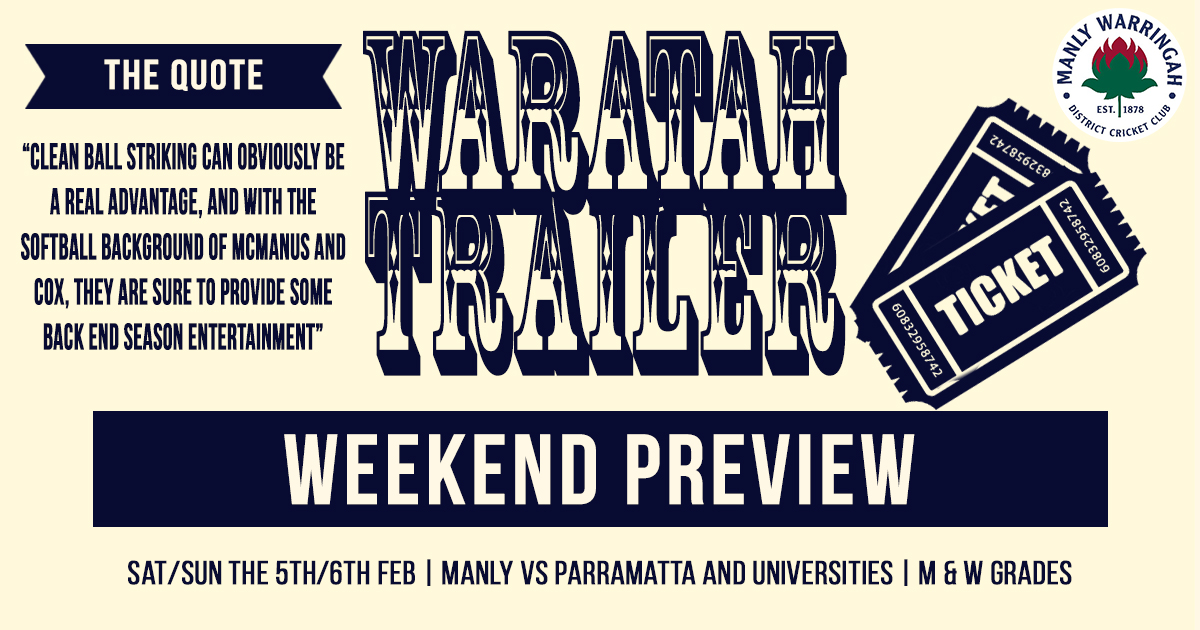 The Women lead the way last weekend as the men stubbled against a strong Easts club. All our attention turns to this weekend’s fixtures when the men face Parramatta and the Women take on Universities.

Saskia Horley keeps breaking records after her brilliant 123* last round, she still leads in the competition in runs scored and will be looking to continue her outstanding form this Sunday against universities at Manly Oval. The Tahs have jumped into 4th position after an impressive couple of weeks and a win against their 9th placed opposition this round could see them finish the round in 3rd. Whilst Horley has been stealing the headlines with that bat, opening bowler Annabel Hutt has found some impressive form with the ball which includes a solid 2/17 off 6 overs last weekend. Universities’ Erica James will be a key wicket on Sunday as she’s scored 313 runs this season across all grades.

Nat Guyot’s second grade side have welcomed some new recruits to the team in Michelle Cox and Stacey McManus who have represented Australia in softball. Clean ball striking can obviously be a real advantage, and with the softball background of McManus and Cox, they are sure to provide some back and season entertainment. The side will be shooting for their third consecutive victory as they continue to push themselves up the ladder. Mia Waddington will be one to keep a close eye on for the back end of the season, she has been in fine form with the ball this season and an incredible 2/11 off 7 overs last weekend was a key part of the teams win.

The 3rd grade side will also be looking for their third win in as many weeks when they battle it out the last placed universities at Balgowlah oval on Saturday. Opening batter Stephanie Hughes produced her best performance of the season so far against North Sydney last weekend when she blistered a brilliant 71 off just 64 deliveries, hopefully this set’s up Stephanie and the 3rd grade side for a big end to the season a they push for a finals position.

Men’s first grade hit a roadblock last weekend as they were defeated by a strong eastern suburbs side. Mickey Edwards made his return to Saturday cricket with the Tahs and looked dangerous for the outset, Mickey will be looking for a strong rest of the season and if he produces his best form, it will hold the side in good stead. Jay Lenton also returns to the side this weekend and will skipper the team against the 11th placed Parramatta at Manly Oval. Jay Impressed with the Sydney Sixers in his short Big Bash stint and will looking to continue his outstanding Premier cricket form for the run home.

The Covid hit 2nd grade side were the sole victors for the men in round 11, Cameron Merchant recently moved up to 4th all-time leading run scorer for the Waratahs and although hasn’t found that big score this season, he’s been looking dangerous at the crease and it won’t be all that far away for the club legend. They head out to Old Kings Oval as they look to jump into the top 3. Their opponents Parramatta face a must win circumstance if they want to be playing finals cricket this season.

Sam Hole’s 3rd grade side will take on final’s rivals, Parramatta at Graham’s reserve. Parramatta currently sit 5th on 33 points and will be a massive scalp for the Tahs who sit one win behind them on the ladder. This game will be crucial for the Tahs push for a finals position.